The artist Benjé Deacon’s depiction of this Jerusalem Alley in the Jewish Quarter of the Old City of Jerusalem brings with it so many fascinating aspects to the fore.

Suddenly You and I are just passing through the Old City of Jerusalem. Immersed in history by just walking through the narrow streets and alleys, never mind the shrines holy to three faiths. The old city is divided into four quarters. See map below. The Jewish quarter is home to around 2,000 people and covers about 0.1 square kilometres. It is also the location of many tens of synagogues and yeshivas (places of the study of Jewish texts) and has been almost continually home to Jews since the century 8 BCE.

Today, the Jewish Quarter of Jerusalem is a fascinating place to explore with museums, synagogues, and of course, the Western Wall its main attractions. As well as these, however, just walking through the alleyways and watching the religious inhabitants go about their daily lives is just as fascinating. The Jewish Quarter of today is located on the remains of the upper city from the Herodian period (37 B.C.E-70 C.E.). Some archaeologists believe the palace of the Hasmoneans (also known as the Maccabees) is among the ruins The owner of this work of art will also be fascinated to know that this Ancient ALLEY was used as the cover page for the well-known novel “The Relic “ or ”A Reliquia” by Eca De Queiroz (1845- 1900).

Eca de Queiroz introduced naturalism and realism to Portuguese literature. He is considered the major novelist of his generation. The Relic was a picaresque story of religious hypocrisy and truth. It’s writing coincided with his marriage and drew on the travels with his wife’s brother to Egypt and the Near East. The young Teodorico wants to escape from the chains of his religious home.

He visits Jerusalem to acquire a healing relic, soon he is transported back in time with his companion, the German scholar Topsius, and meets Jesus himself, witnessing the crucifixion.

Take a piece of History with you. 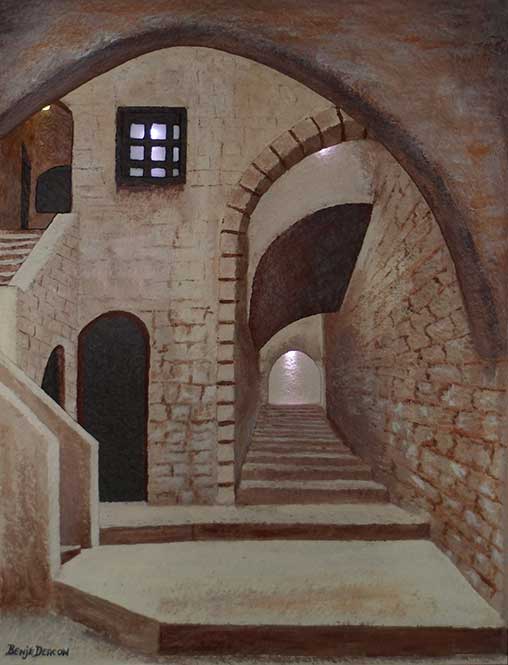